In the most common configuration stacked yagis are fed in phase to develop maximum gain in the forward direction. Reverse phase feeding is a less common option that is used to create high angle lobes. The latter is not my concern since I have a low tri-bander (or two) for that and I can keep the stack switching uncomplicated.
The home brew stack switches I am now building transform the 25 Ω of the two 15 and two 20 meter yagis connected to 50 Ω. The yagis are connected in parallel at the switch. Control lines and relays allow selection of either the upper or lower yagi, and to bypass the impedance transformation network.
When the upper or lower yagi is selected the length of coax from the switch to each yagi is unimportant. It simply has to be long enough to span the distance and minimize transmission line loss. When both yagis are connected in phase the coax to each yagi must be the same electrical length.
There are installations where it is helpful to have different lengths, but in those the difference must be an integral number of electrical wavelengths. To stack multi-band antennas such as tri-band yagis you must use equal lengths of coax since you cannot preserve phase on all 3 bands with any other combination of lengths. However you could do it for just 20 and 10 meters since they are harmonically related.
For my 15 and 20 meter stacks the coax lengths will be equal. This is not as simple as it sounds. In addition to the physical length there are a few factors that must be taken into account:
There is also the matter of accuracy which effects phase and therefore stack performance. This is a separate issue that I'll return to later in the article. 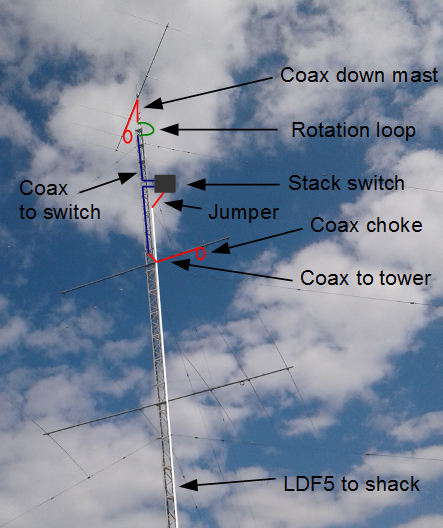 Accounting for the lengths of every section of coax and is tedious work, but it must be done. Although my exact requirements were unknown when I raised the lower yagis this winter I was careful to measure out the length of the coax in the chokes and along the boom so that they are within easy reach on the tower.
For the upper 15 meter yagi the coax is longer so that it can be reached from the tower without climbing the mast. For the upper 20 meter yagi the coax must end well before the rotation loop so that the connection can be secured to prevent flexing of the joint during rotation.
The picture shows the current state of the stacking project, with 3 of 4 yagis in place. Annotations highlight where the components of the phasing system will be approximately located.
The only parts installed right now are those coloured red and white, with the exception of the jumper from the transmission line. Those lengths of coax are otherwise difficult to see clearly in the photograph.
Calculation aid
To plan it all I developed a spreadsheet where I can enter the length and velocity factor of every section of coax. The electrical lengths are calculated and summed. The lengths can then be adjusted until the they are equal. It is important to ensure there is enough coax to reach between adjacent sections, and that calculation must be done manually.
Make the tower runs a little longer than necessary to guarantee that they reach. I included an "extra" length which I didn't need but which may yet prove useful for lengthening the sections. 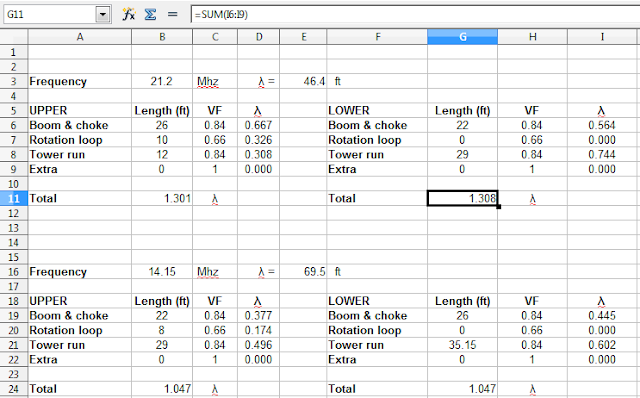 This is not the final version of the phasing harness calculations. During a tower climb this week I measured other rotation loops to for planning data. Ordinarily I don't record these lengths since they are not critical and every tower has different requirement. For stacking the length is critical. Exact spans to the switch box are pending final measurement. Wherever possible the lengths are an integral number of feet to keep it simple, and that helps to avoid mistakes later.
The velocity factors are those for the types of coax to be used. It is 0.66 for solid polyethylene dielectric RG213 and equivalents (rotation loops), and 0.84 for the foamed PE found in variants of LMR400. Remember to confirm the velocity factor for the coax you choose. Heliax VF is 0.89 or 0.90, which I won't be using for phasing these stacks.
I am planning on LMR400 for the tower runs since at the moment I've run low on Heliax connectors and my usual sources of surplus connectors have run out. The additional loss on 20 and 15 meters for these relatively short lengths is quite small. The approximately 100 meter runs from the remote antenna switch across the field and up the tower to the switch box are Andrew LDF5-50A Heliax.
I now need to order more PL259 UHF connectors. Although every past order includes extras I always run out sooner than expected. I have lots of soldering ahead of me. Others prefer crimp connectors or purchasing custom lengths of coax with connectors. I don't mind the few minutes to solder connectors, and it isn't difficult with silver plated connectors available at good prices from many outlets. For repairs on the tower on coax that cannot be lowered to the ground crimp or compression connectors are avoid soldering connectors on the tower which, believe me, is difficult.
Accuracy
With so much discussion about getting the lengths of the coax exactly equal for in-phase stacking you might believe this is critically important. It really isn't. A sensitivity analysis with software is enlightening. In EZNEC I varied the lengths in the two runs of coax to the individual yagis to determine how close they need to be before performance is noticably degraded. I've done similar exercises in the past, including one many years ago for quarter-wave transmission line transformers. 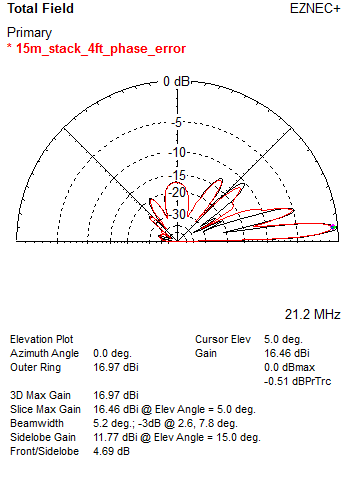 My chosen criterion is a reduction of -0.5 db forward gain. This is arbitrary in that 0.5 is almost negligible but might make a difference in practice.
With respect to the phasing coax you don't need to be concerned about is F/B, F/S and SWR. When the separation between yagis is large enough the mutual coupling too small to appreciably affect each yagi's individual behaviour. That is the case for my 15 and 20 meter stacks. Although there exist heuristics for this measurement it is better to do a software model.
F/B and F/S are little affected since a summing of fields which are already very small will remain small, and poor coupling limits impedance effects; they really cannot degrade. Guy wire interactions are a greater concern with respect to pattern and SWR.
What can degrade due to phase error are the minor lobes and the nulls between lobes. Those are directly determined by yagi phasing as we are about to see.
The model held a surprise. The coax (LMR400, VF 0.84) to one of the yagis had to be shortened 4' (1.2 m) for the gain of the main forward lobe to drop by -0.5 db. (The absolute gain in the above chart is understated due to an average gain error caused by the NEC2 model of the gamma match.)
That 4' difference is an error of just under 0.1λ (35°) on the 15 meter band. For one quarter the error (1' or 30 cm) the effects on pattern and gain are negligible. A few inches (cm) of accumulated error is not a concern. Although you clearly needn't obsess over every millimeter don't use this as an excuse to become reckless. As you go up in frequency length errors become increasing important, and are critical at VHF and above.
More significant that the gain is the filling of the nulls, especially the large one between 30° and 40° elevation. This is expected. Indeed, feeding both yagis 180° out of phase (BOP) is a common way of increasing the elevation angle, at the expense of the low angle main lobe. Many commercial stack switches have this feature.
Next steps
A few days ago I took delivery of the parts needed to build the stack switches. In the coming weeks I will build and tune the switches for the 15 meter and 20 meter stacks. Assuming other projects don't clog my schedule I should have both stacks fully operational by late September.
Other than the phasing and switching the upper 20 meter yagi has yet to be raised (it's a monster). The prop pitch rotator has to be installed and there is a lot of cabling to be done and a temporary control system built for the operating desk. All of this will take time.