A long time ago I was driving through the city with one of my siblings. The sky was uniformly gray and a steady rain was falling. Further down the road the rain abruptly stopped within less than one block. Two blocks later the pavement was dry and soon thereafter the clouds parted and sunshine blazed. It had become a beautiful day.
She expressed surprise that the rain could disappear so abruptly, with such a sharp dividing line. I answered that the rain has to end somewhere so why not here. Of course this happens all the time but our perspective is different when we are standing still and the weather moves over us rather than the opposite.
Radio propagation can behave the same. For sporadic E on 6 meters we are almost always riding the MUF, the frequency above which the signals don't reach the ground. The E-layer regions of unusually intense ionization are small and typically only support propagation between relatively small areas, except in exceptional cases. We call it spotlight propagation and like a spotlight the edges are often sharply defined.
A shift of a few kilometers can be the difference between the opening of a lifetime and an empty log. I experienced this phenomenon twice in the past week. With the arrival of the summer solstice the sporadic E season is at its annual peak 6 meters is consuming all the time I have available for operating and makes me all too aware of the joys and frustrations of DXing on the magic band.
I will give you two examples that are illustrative of the phenomenon of a bright line between the haves and have nots. These may help to explain why you are in a DX desert or the land o' plenty.
About a week ago 6 meters was wide open almost everywhere at the same time. Within minutes signals could be heard here from Europe, Africa, South America, the Pacific and the Far East. I didn't know which way to turn the yagi. The rotator had a real workout that afternoon.
I worked a lot of amazing DX, including my first KH6 via sporadic E. The spotlight roamed in the Pacific, eventually striking the sweet spot for working Hawaii. In other places the spotlight stood still, such as in South America where I only heard Ecuador and proceeded to work what may be every HC active on 6 meters. What I didn't work was the Far East.
It was aggravating. Just 300 km to the west many hams I know in FN03, EN93 and nearby grids (and eventually extending west right across the country) were working a steady stream of JA, HL, DU and BY. Here is FN24 I decoded a total of 3 FT8 messages, and that was from a single JA. That's it. While it was going on I was exchanging messages with a couple of friends in FN14, about 100 km to the west, and they didn't hear anything at all (my antenna is better).
In the map below you can see that the beginning of the peak probability for the path to Japan and the vicinity is 2200Z when the sun is midway between here and there, and therefore the greatest insolation on the northern edge of the path. Sporadic E is sporadic but it needs energy input. 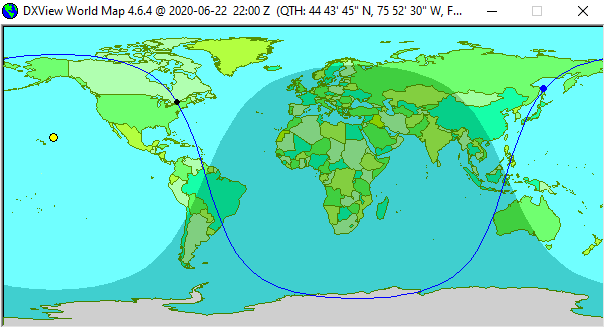 This was my second near miss with JA this year. It's a difficult path and the rain has to end somewhere. That somewhere was near Toronto. The good fortune did extend further south, along the same path from the northwest that favoured southern Ontario. You just had to be in the right place; FN24 was in the rain and FN03 was in the sunshine.
I shouldn't complain too much. I had my day with working Japan last year, and there is reason to hope for more this year. To the east, further from the line of propagation, the big gun 6 meter stations heard nothing. It's a difficult path since a short move east brings the path from the Far East closer to the north pole. The benefit of 24 hour daylight in the Arctic at the solstice is rarely sufficient.
The next example of spotlight propagation is one that favoured me and few others. During a marginal opening to Europe I saw 6W1TA calling CQ on FT8. I turned the beam east and his signal came up nicely. Since I worked him earlier this year I let him be. I tend not to make duplicate contacts since you never know if the person will be annoyed or glad to know he's getting through. However I am always happy to respond to duplicate callers.

This went on for some time. Was this a spotlight opening and only I could hear him? There could have been other factors like yagis pointed to Europe or the Caribbean which would significantly attenuate west Africa signals. Perhaps I should have spotted him although that would have required starting other software and I rarely spot FT8 stations since anyone can see them themselves if they have propagation.

It isn't every day you are called by a moderately rare station and especially on 6 meters. I suppose he heard little other than me since the CQing and I didn't notice him call anyone else. Those in rare locales are hams just like everyone else and they want to communicate. I was happy to make the duplicate contact.
It's funny that not long ago I chased him hard to earn the new 6 meter country. Last year I was unlucky and missed him because although the opening was superb it was also superb for everyone else in North America.
Eventually he did work at least one or two other stations. I was amused to later discover that he had spotted me. You need propagation to benefit from being spotted and 6 meter sporadic E long DX paths and this was no different. No one scrambled to call me or they did and heard nothing.
I was going to end the article here when the very same thing happened again the next day.

It is difficult to believe that only I heard him or that everyone in this region has worked him. I monitored 30 minutes of CQ with no apparent callers. His signal was weak but steady all that time. There are a few others active in Africa so hopefully one day I'll work them. But I worked TT8SN already and elected not to bother him.
I will stop now. Should you be wondering what happened to all the technical articles, fear not. I have several projects underway and I won't write about them until they're done. Pictures and words are accumulating and the articles will eventually be published.
While that work continues in the background and with sporadic E in full swing these little articles almost write themselves. I suspect my slow summer blogging pace won't return this year.