Earlier this year I showed the design of a 3-element switchable wire yagi for 40 meters. Soon after I expanded the antenna to 4-elements but never wrote it up. Since it's winter and I have some additional time I decided to refine the design and publish it. I was also motivated by the relatively high interest shown (based on page hits) for my various wire yagi designs for 40 meters.

In this article I will only focus on the differences from the 3-element design so please refer to that article for details not addressed here.

Adding a fourth element is straight-forward. Obviously the antenna is larger (longer) but it has some unusual features that are worthy of discussion: 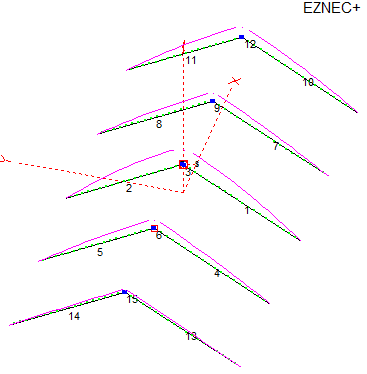 I started by adding a 2nd director to the 3-element model. I made it the same length as the 1st director used the same spacing as that for the driven-to-director. This approach is in keeping with W2PV's modified NBS designs that can achieve optimum results for gain, F/B and bandwidth. Wire yagis work as well as his tubing-based designs but with higher element loss and somewhat reduced bandwidth.

As mentioned above the 2nd director is not switched; it is a continuous length of wire. For this reason a similar element must be placed on the other side of the yagi for the 2nd director in the reverse direction.

If it seems odd that a director could be placed behind a reflector do keep in mind that the action of the reflector pretty much isolates the antenna from any resonant conductor behind the reflector. In the above current plot you can see that there is only a small induced current on the 2nd director when the adjacent switched element is configured as a reflector. The amount varies with frequency -- in fact all element currents substantially vary with frequency. In modelling I found that the position of this element needs no adjustment to compensate for its mutual coupling.

This is not a small antenna! It is 29.6 meters long and requires two tall supports, such as towers supporting rotatable yagis, preferably guyed to deal with tension in the cable "boom". As with any antenna for 40 meters you want this antenna high. This is especially so with inverted vee elements since the ends can come close to ground. I recommend a minimum height of 20 meters (λ/2). A height of 30 or more meters is even better.

The antenna elements have an interior angle of 120°. So not only is the antenna long it is also wide. The "wing span" (or width) of the antenna including tie ropes anchored to the ground is 70 meters, when the apex is 20 meters. Wing span scales linearly with increased height. Vertical supports can be used to reduce wing span and increase safety for anyone walking in the area.

A smaller interior angle reduces the wing span but will require longer elements and retuning due to lower feed point impedance. Performance at low angles will also be reduced due to the lower height of average current.

Ideally the antenna supports, if they are towers carrying yagis, should be further apart than this antennas "boom" length of ~30 meters. This is to reduce interactions that could distort the patterns of one or more antennas. Similarly the cable supporting the wire elements should be mounted no closer than 5 meters below the top of the towers, and preferably more if the directors are positioned near either tower.

The additional gain attainable with one additional element is not a lot, even with the longer boom. It is an unfortunate truth that with yagis there are rapidly-diminishing returns with increasing size (elements and boom length). Actually it is the boom length that is the critical parameter. It is just that you need enough elements to ensure sufficient inter-element coupling to achieve the benefits of the chosen boom length. 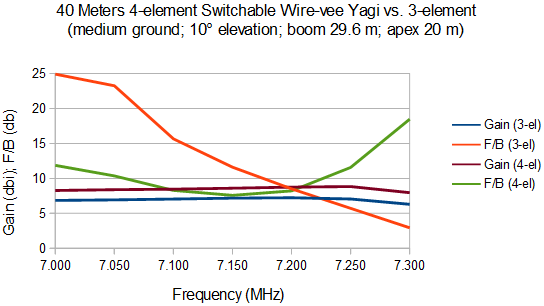 This antenna achieves from 1.4 db to 1.9 db more gain in comparison to the 3-element wire yagi, for the given elevation angle and height -- 10° is median elevation angle for most DX paths on 40 meters. This may not seem like much yet it is enough to be seriously considered for the modest additional effort required. After all, stacking two yagis gives on average 3 db of additional gain, and this wire yagi is far easier to deploy. 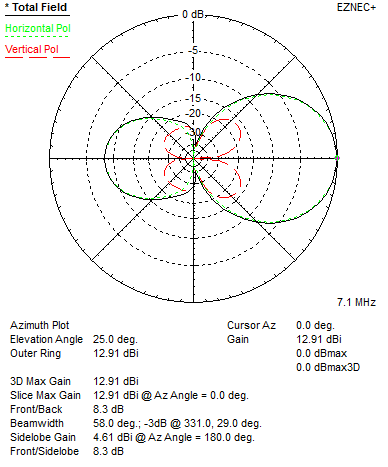 F/B has two peaks, but both are outside the band. The average 10 db of F/B is good enough for my purposes. The reason it is so modest is that the effective boom length of 22.2 meters is ~λ/2. As W2PV showed so long ago F/B in a conventional yagi peaks for boom lengths that are odd multiples of λ/4 and is worst at even multiples.

As gain increases the width of the main lobe decreases. The main lobe (azimuth) is 58° at the -3 db points. When centred on 50° bearing I could cover all of Europe and much more. In the reverse direction of 230° I can cover the South Pacific and most of the continental USA.

When raised to heights greater than 20 meters the main lobe's elevation decreases. This further improves the antenna's DX performance. However a smaller secondary lobe appears at high angles. In practice this is not a problem.

All performance figures include I²R loss for elements made from 12 AWG insulated copper wire. The average loss is -0.3 db, except for a steep rise near 7.3 MHz where it climbs to -2 db due to a corresponding steep rise in antenna current in the driven and director elements.

When yagis grow to 4 or more elements it is common for an optimized design to display two "humps" in its performance metrics. This particular design show aspects of that with respect to F/B and SWR, but not with gain. The antenna has two resonant frequencies (where X = 0), one low in the band and one higher. While this can help to achieve a broadband match there is some challenge in taming those two humps.

I settled on a beta match. After some experimentation with network parameters I reluctantly concluded that compromise was necessary. Experimentation included varying the beta match stub impedance from 100 to 600 Ω, and even trying a fixed inductor. The stub impedance matters since the rate of reactance change for fixed values of frequency and stub length is a function of impedance. The idea is to have the reactance at least partially track the uncorrected capacitive reactance across the band. Unfortunately that second hump makes this impossible. A fixed inductor fared no better.

The above SWR curve seems to me to be an acceptable compromise. This required a longer than expected driven element length of 19.85 meters (12 AWG insulated copper wire). The transmission line stub is 1.5 meters of 300 Ω open wire line. If plastic is present in the stub's construction it must be made shorter due to the lower velocity factor.

On the other hand, with 100 meters of RG-213 feeding this antenna the SWR at the shack end of the coax is below 1.5 from 7.000 to 7.275 MHz. Lower loss cable is recommended for the long run that is likely required, at the cost of having the SWR closer to that shown above.

If the antenna is raised higher the SWR profile remains the same. That does not hold for heights below 20 meters since the ends of the elements interact with ground.

I like this antenna. Should I ever have the required supports I would seriously consider building it. Perhaps at an even greater height. One added step I would take before doing so is to improve the match by some means. That could be done with a dual-driven element or a switchable load at the feed point.

If built there would have to be at least one more antenna to cover the azimuth directions outside the reversible main lobes of this fixed wire antenna. A rotatable yagi would likely be the best choice. As should be obvious by now I am talking about antennas in a substantial installation, which is nothing like I could even dream of at this time. Perhaps never, though dreaming is free.

Gain could be slightly increased with further tuning of the parasites and element spacing. But doing so makes the match more challenging since the radiation resistance will vary more over the band. I opted for a design that (barely) makes the match work with a simple fixed network. 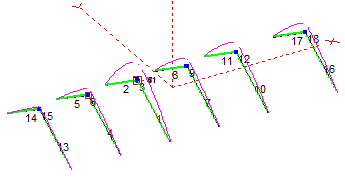 The antenna can be further extended. By adding a 3rd director I was rapidly able to increase the gain to 1.5 to 2.0 db above that of the 4-element design. I kept the same director length and spaced it 10.4 meters from the 2nd director. In the model (shown at right) I took the expedient step of not adding a 7th element for reversibility. Its presence in the model would have a negligible effect, and can be easily added when it is built.

The match, unsurprisingly, was a challenge, being a more extreme case of that seen with the 3-element antenna, due to the wide range of radiation resistance across the band that comes from optimizing for gain. The match could be improved by tapering the lengths of the directors, but only if you are willing to sacrifice 0.5 db or more of gain.

The antenna could be extended to 80 meters, and even interleaved with the 40 meter antenna and using a common feed, with some design tweaking. Getting performance on 80 with this antenna is a problem since it requires more height, at least 30 to 40 meters up, and some means of tuning to make it work across the band. The scaled model has a usable bandwidth of no more than 100 kHz. I have some doubts as to whether it could outdo a well-built 4-square on 80. Local ground and topography would play a large role in any meaningful comparison.

I will leave off wire yagis for a while to focus on other antenna designs that currently have my attention. With the holidays around the corner this may have to wait until January. I also intend to expand on why I am so focussed on antennas for the lower bands.