When it comes to antennas it has always surprised me how much can be accomplished with very little. My very first antenna in 1972 was a 20m dipole running from the edge of the roof to the top of a clothesline post. The average height was no better than 4 meters. With that and an 807 I worked the world. 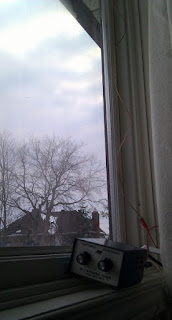 The eaves trough antenna (mentioned yesterday, and feed point shown in the adjacent picture) is at least as good, and it's up higher: 6 meters. Of course it also helps that I'm no longer in the radio black-hole that is VE4-land.

The antenna farm I took down in 1992 consisted of a 19-meter tower sporting a TH6DXX for high bands, long-boom yagis for 6m and 2m stacked above it, a 2-element 40m inverted-vee wire yagi and a half-sloper for 80m. Toss in a 30S1 and I was competitive in any pile-up (and I could generate a few myself).

My plans for 2013 are substantially more modest since this time it's for fun, not to be competitive. As I got down to planning last month I made a list of the primary objectives my next antennas would have to meet.
I did not list low cost since that is not an objective. However if I can make it inexpensive that's certainly a positive outcome.

I have been designing supports and antennas during the past several weeks. I upgraded my ancient version of EZNEC from W7EL (actually EZNEC+) and put it to work on my quad-core desktop. Ideas are gelling into solid plans.

I'll talk more about these antenna designs in future posts. Right now I'm being distracted by the background sound of an unruly pile-up on XT2TT. This one may be out of reach until my antenna plans come to fruition in the coming months. Spring is in the air.