Aircraft scatter has long been used by microwave enthusiasts. Enthusiasts monitor aircraft data and operate remote to get the best from it. Although the propagation mode is artificial in a way, it is very useful for getting over mountains and other obstacles, and to make the contact when more natural propagation is uncooperative. On HF aircraft scatter is of little value since ionospheric propagation is very reliable, and in any case the scatter is poor because aircraft are too small to be good mirrors at the longer wavelengths of the HF bands. 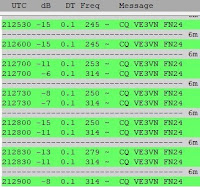 On 6 meters, aircraft scatter is not terribly useful since there are other and better propagation alternatives. It is of no benefit for my focus on DXing, and can be a nuisance. Aircraft scatter is easily seen on the spectrogram window of digital communication apps, when you know what to look for.

For our summertime amusement let's look at aircraft scatter on 6 meters FT8. For those within about 100 kilometers of a major airport it is common.

The example below right shows aircraft scatter for a signal source less than 100 km from me, as the crow or aircraft flies -- the intervals are compacted because I was transmitting during the odd/second periods.

The distance matters since you will only see this for stations not too far away. This will be explained later.

Those images look like and are often incorrectly identified as distortion. Sometimes they are decoded and sometimes not, depending on the coherence of the scattered signals. Above is a report I received from a ham in the Montreal area (about 175 to 200 km away), when we were both new to FT8. He wondered what was going on, wondering whether there was something amiss with my transmitter or his receiver. So did I at first. It is interesting that the primary signal at 314 Hz was not always decoded when the scattered image was.

The spectrogram at right is from a station in Ottawa (80 km away). There are two of these shadows, due to at least two airplanes. We live underneath the busy air corridor between Montreal and Toronto, and there are medium size airports in Ottawa to the north and Syracuse to the south. In this airspace there can be many aircraft scattered signals. The multitude of local airfields contribute little to the aircraft scatter we see because their traffic volume is low and the aircraft are small with a small reflection surface.

If the station is farther than a few hundred kilometers and you see these images, and they're not decoded as coming from other stations, it might indeed be distortion. For comparison with aircraft scatter the spectrogram below shows actual distortion on an FT8 transmission. There are similarities and obvious differences.

The diagram below is a simplified view of aircraft scatter. It is not to scale and it is restricted to just two dimensions. That is enough for us to get started.

There are similarities and differences with CW (continuous wave) Doppler radar systems. The receiver (A) and transmitter (B) are widely separated and the two signals are not brought together for processing. I have commercial experience with products incorporating low-power CW radar so investigating aircraft scatter recalls memories from years ago.

Because A and B are far apart we have a large area (2) that is atypical of conventional radar systems. It is the most common scenario for aircraft scatter because for (1) and (2) the path loss is substantially greater and tropospheric refraction is required when the aircraft is below the radio horizon for one or both of A and B. Diffraction may be needed to get around tall buildings and hills when the elevation angle is small.

Since the aircraft velocity is high and the fuselage has a complex shape, the specular reflection is not coherent and varies with time. Also, the projected cross section and orientation of the aircraft affect the amplitude and coherence of the reflection. We are not concerned with calculating a precise reflection signal so we need only be aware that several factors impact signal amplitude, variability, Doppler shift and FT8 signal integrity.

Aircraft scatter is therefore more likely when the aircraft is not far from both A and B, and is unlikely for cases (1) and (3) when the aircraft is more distant. The projected surface area of the fuselage is at a minimum in the latter cases cases, which contributes to a scatter signal too weak to be detected.

The second radar equation is for the Doppler shift. It is double the value of conventional Doppler shift because it applies for the incident radiation and for the reflected radiation. For (2) the Doppler shift is lower than for conventional radar because it is positive in one direction and negative in the other, and the sum can be a small Doppler shift. Despite the reflection not being visible on the spectrogram it can interfere enough with the direct signal to reduce the probability of decoding success. The decoding algorithms are fantastic but they don't handle overlapping synchronized signals very well.

Let's do a calculation. The maximum air speed of a commercial aircraft is very roughly 1000 kph. Yes, it can be higher when at cruising altitude and travelling east within the stratospheric winds, but those are uncommon for the scatter scenarios we are likely to encounter. We do not require high accuracy for this exercise, so 1000 kph is useful as an appropriate maximum velocity.

The Doppler radar frequency shift is easy to calculate. A speed of 1000 kph is 278 m/s, or 0.00000093c, where c is the speed of electromagnetic radiation. At a frequency of 50 MHz the Doppler shift is therefore 92 Hz. At higher VHF and UHF bands the shift will be greater, in proportion to the frequency.

It is a coincidence that the aircraft scatter Doppler shift and the FT8 42 Hz bandwidth are of the same order on 6 meters. Since the 92 Hz maximum is uncommonly seen, the majority of shifts are closer to that of the FT8 bandwidth. When the shift is less than the bandwidth of an FT8 signal the direct and scatter signals will overlap.

When the two signals overlap the effect is more likely to be mistaken for distortion. The effect reduces decoding probability but it is not the fault of the transmitting station. Be very certain of your signal analysis before criticizing the operator!

Perhaps the most obvious example of aircraft scatter is the one at right. Do you see what is happening? The aircraft is most likely turning to a direction that increases the relative velocity with respect to A or B. The aircraft rolls during the turn, orienting its belly to present a greater projected surface area. When the rolls ends the scatter surface is reduced. Doppler shift continues to increase as the aircraft gains speed.

This is most likely occurring soon after take off with the usual turn from the runway direction to the desired heading. Certainly there are other explanations consistent with that spectrogram, however, even if my interpretation is incorrect the depicted characteristics of aircraft scatter are illustrative of the general phenomenon.

We are not done. Our antennas play an important role in another characteristic of aircraft scatter on FT8 signals. The amplitude of the scatter signal is not constant, as is easily seen across the long 15 seconds on-off intervals of FT8 transmissions. That alone is highly suggestive of the effect not being due to distortion.

At right is an example. Both the scatter and direct signals vary in strength, however they do not vary in tandem as they would for distortion. The scatter signal strength also oscillates over time. Again, although there is more than one possible explanation for that specific spectrogram I want to focus on one in particular and probable explanation.

VHF antennas develop numerous elevation lobes due their great height relative to wavelength, and far filed interference with ground reflections. The greater the height, the more lobes there are. These multiple lobes come into play when an aircraft enters the field, and they do so in a manner that is far more evident than far slower propagation path changes involving the troposphere and ionosphere.

The elevation angle between the aircraft and both the receiver and transmitter changes quickly as the aircraft races past. It traverses those lobes and nulls as illustrated below. As before, the diagram is not to scale.

The elevation angle from a fixed point changes with the aircraft's position. The elevation plot is for my own 6 meter yagi that is up 24 meters (4λ). With all those lobes the signal strength to and from the aircraft will oscillate in a regular pattern for several minutes. The more rapid oscillation at VHF and UHF bands above 6 meters will see the oscillation occur within a single FT8 interval. At lower HF frequencies the oscillation may be mistaken for ordinary propagation effects.

So much for fun with 6 meter FT8 aircraft scatter. Now it's back to working the DX on 6 meters. It's hard to believe that the sporadic E season is beginning its decline and soon my attention will turn back to HF. I'll have more to say about this year's sporadic E season in mid to late August when it is done. All I will say right now is that it has been interesting, challenging and rewarding.