Tuners Do Not Solve All Ills

That may not sound like a profound statement yet, for me, it is. As far as my DXing goes it simply means I don't go there. Until I am in a position to raise effective DX antennas for those bands I stick to 40 meters and higher bands. The dilemma comes from contest operating. If I don't operate on those bands I miss out on some easily-acquired multipliers, whether it be CQ/ITU zones, countries (VE & W), ARRL sections, or states/provinces.

For my proximate need there is no need for a great antenna on those bands. It is minimally sufficient to work only a few stations to give the contest score a big boost. For example, in my report on the CQ WW CW contest in 2013 I mentioned that I used a tuner to put enough of a (poor) signal on 80 meters to work a couple of stations and add 4 multipliers (VE, W, zones 4 and 5). Yes, that really does make a difference to one's contest score and is well worth several minutes of effort to re-cable and fiddle with the tuner.

As it turns out it isn't as easy as it sounds. Certainly I have a tuner, several in fact, including one that is big enough to have only modest losses at high SWR. It has no trouble at all getting a 1.0 SWR match on 80 meters for my currently largest antennas: multi-band inverted vee (30 through 10) and delta loop (40). However the results were not at all equivalent, or even what I expected.

Neither antenna is even close to resonance on 80 meters. The SWR is high, very high. It is so high that EZNEC gives up on the calculation, only indicating that it is above 100. That is the feed point SWR, not what you see in the shack. At such high mismatches there is considerable loss due to transmission line attenuation. It may seem odd but this can be viewed as an advantage since the resulting high (not extremely high) SWR means that the tuner can achieve a match without risk of excessive loss in the tuner.

To give you some idea of how high the SWR is on 80 meters with those two antennas I used EZNEC to quantify the antenna feed point impedance at 3.525 MHz.
Since the true SWR is very sensitive to environment factors at these extreme impedances these are at best only rough estimates. The point is that the SWR is pretty much off the charts, and it has consequences.

The drawing of the setup gives us an idea of where to look for trouble spots.
Having dispensed above with the loss due to the tuner I will first turn to the radiation and ground loss. After all, the title of this blog is Pattern and Match and I often emphasize putting the priority on pattern. 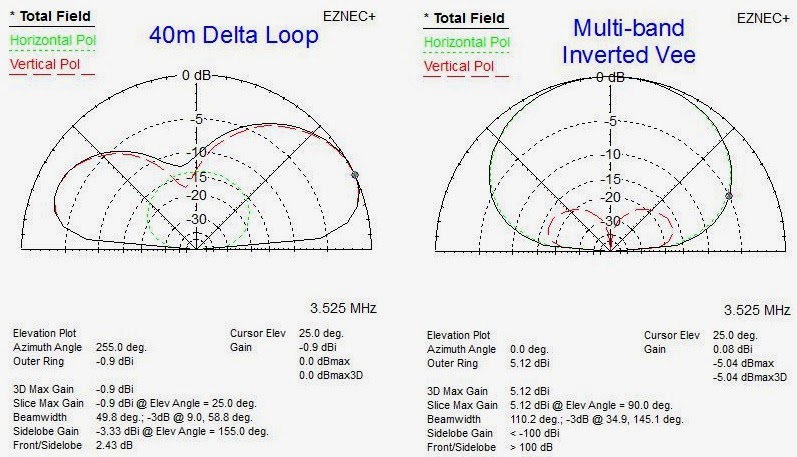 In the above patterns I have normalized the gain to 25° elevation. It should be no surprise that the horizontally-polarized inverted vee directs most of its radiation straight up since it is very low to the ground on 80 meters. The pattern suffers less when using the 40 meters delta loop, remaining primarily low angle and vertically-polarized. Both antennas are close to omnidirectional on 80 meters since they are quite small in terms of wavelength.

The antenna I²R loss is low in both cases despite the very low radiation resistance. It is no more than about -0.2 db with 12 AWG insulated wire. I expected worse, so that is one positive outcome.

Now we must deal with transmission line loss. This can be difficult to model since many of the more common equations in use become increasingly inaccurate at very high SWR, and the SWR of these antennas is very high indeed.

Unfortunately the VK1OD transmission line loss calculator I've used in the past has been taken down by the author. There are other calculators on the internet but may suffer from the inaccuracy cited above. Nevertheless that is what I went ahead and did with a couple of online calculators. The true loss could be higher than the figures I am going to report.
Both figures include the sum of matched loss and mismatch loss for ~25 meters of  RG-213 coax between the tuner and antenna feed point. I did not compensate for the λ/4 of RG-11 matching section on the delta loop since with these levels of mismatch the difference on the results is unlikely to be significant.

Gaze at those loss figures for a moment and think what they mean. If you transmit 1,000 watts on 3.525 MHz on the delta loop more than 990 watts is dissipated in the transmission line. In a way that's a good thing since at these levels of mismatch the high voltage points along the coax could otherwise punch through the dielectric and destroy the cable.

Summing all the losses, at 25° elevation the gain at 3.525 MHz on the inverted vee is -11 dbi and on the delta loop is -24 dbi, minus any tuner loss you wish to include. Most of the loss components are already included in the EZNEC model. I did not use EZNEC to model the transmission line loss. These loss calculations explain why, while both antennas performed poorly on 80 meters with a tuner, I could make a few marginal contest contacts with the inverted vee but not at all with the delta loop.

Using a shack-based antenna tuner can produce far worse results than you might imagine since the SWR can be extraordinarily high. Do not be deceived by the facility with which a non-resonant antenna can be matched in this way. Tuner and other losses pale in comparison to transmission line losses for all but the shortest runs.

In retrospect this is why I was able to do so well with my eaves trough antenna, including making contacts on 80 and 160: there was no transmission line between the tuner and antenna. Although I cannot easily do an A/B comparison, I believe that the eaves trough antenna performed better on 80 meters than either the delta loop or inverted vee. This is despite its low height (6 meters), bends, corners and attachment to a conductor- and dielectric-ridden house.

The options to deal with this problem should be clear. I will list them anyway.
There are other conceivable solutions to specific circumstances. For example, a switch or relay can be used to break the 40 meters delta loop into two separate arms, resulting in an asymmetric λ/2 doublet. Unfortunately it does not resonate at half the 40 meters resonance, and for anything other than QRP the switch (relay) will very likely flash over when transmitting since the voltage at the ends of a doublet can be very high.

Another possibility (one that many have tried, including myself) is to unscrew the coax connector so that only the center conductor of the coax is connected. Then ground the tuner (or transmitter) side of the outer conductor. While there is the risk of RFI, hot grounds and higher ground losses, the antenna can become much more efficient when matched by a tuner. The transmission line becomes part of the antenna. When it does work it usually only works on 160, and not so much on 80.

Non-resonant antennas in typical use are poor performers, as measured by system efficiency and pattern. Unless designed for a specific purpose, a non-resonant antenna that is opportunistically tuned to make QSOs may suit in a pinch but is otherwise a bad idea. It will net a few multipliers in select contests, but nothing more.

If you want an effective signal for DX, contests or other interests, design and build an antenna that will achieve your goal. Opportunistic use of a tuner is rarely effective. You may be better off locking up or selling your tuner so that you never succumb to temptation.