For those who have followed along I have written a number of articles over the past several weeks on one and two-element wire antennas for 40 meters. My objectives are particularly aimed at DX (low angle) performance and a single support for the antenna apex. Some of these antennas were only intended as references -- the dipole and inverted vee -- for the purpose of comparison.


[The TL;DR version of this long article is to just read the chart below. I at least want the long version to document my observations for future use. Others might not.]

This article is an opportunity to distill a few performance aspects of all these antennas in one place. The result is one (very) busy chart plus several discussion points. To introduce the chart I will make a few points, most of which have appeared earlier. 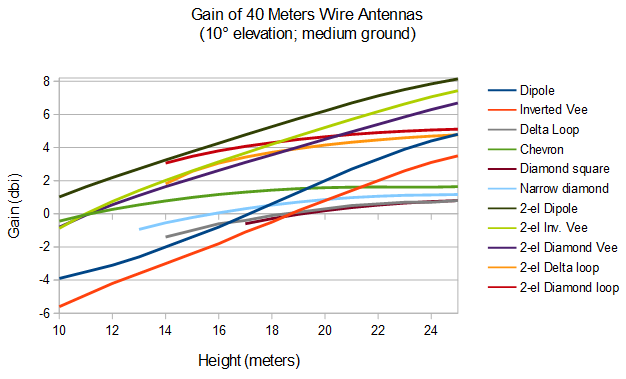 Yes, it's a busy chart, but it isn't too difficult to unpack if you note that the dipole and inverted vee start from the bottom left and are roughly parallel, and the three 2-element yagis (dipole elements, inverted vee elements and diamond vee elements) start at the centre left and are also mostly parallel. All the loops and loop arrays cease to increase in gain as the height increases.

There are a few conclusions to be taken from this chart, which I'll list. Just keep in mind that there are a number of factors that could reduce the performance you might see in actual practice.

If you must have gain, at any height, you should put up a wire yagi. While it may seem an expensive waste, a rotatable 2-element short yagi only 15 meters high will do very well. As you turn down the element ends, as you must with a fixed (or switchable) wire yagi, make the angle as shallow as possible. Alternatively, or below about 18 meters, a 2-element narrow diamond loop array will give about the same gain and superior F/B. But first test for tower resonance which would impact performance.

If you want to keep it simple and use a single element a vertically-polarized loop is the superior choice at heights below 18 meters. The choice of loop configuration is determined by how much F/S and low-SWR bandwidth you can live with, suitable tie-down points and interactions with the tower, a high-bands yagi above the loop and the local environment. The chevron loop offers the best gain but requires the greatest amount of compromise. The delta loop offers the best omnidirectionality but with unexceptional gain.

Wire antennas are made from conductors that are narrower than found in the typical rotatable yagi made from aluminum alloy tubes. This results in resistive (I²R) losses that are higher than in the rotatable yagis despite copper being a better conductor than aluminum. Aluminum oxide, which readily coats the surfaces of yagi elements is a good enough conductor to not change this relationship.

Oxidized bare copper wires (cuprous oxide) have higher resistance, and therefore loss. The impact on low HF is usually not a large concern since the oxidation doesn't usually penetrate too deep and the skin depth is greater. Stranded bare copper is worse than solid bare wire since there is more surface area that will oxidize. I use stranded copper wire in most of my antennas, but I use insulated wire to avoid corrosion. There is dielectric loss in the plastic insulation, but it is small at low frequencies.

In the 2-element wire antennas the impact of resistive losses is more pronounced since the radiation resistance is lower. This results in greater current flow and thus greater loss in the conductor resistance. This is not a large effect but is still significant. The typical loss figure for the 2-element antennas in this article is -0.3 db.

W8JI has a description of radiation resistance, height and loss you should consider reading if you'd like to learn more on this important topic. It also applies to the next topic.

I think everyone knows that the free-space broadside gain of a λ/2 dipole is ~2.1 dbi. When the length is shorter the gain declines. One way to understand this is to imagine a dipole getting shorter and shorter until it becomes a point source. A point source is an isotropic radiator with a gain of 0 dbi. That we cannot actually build this antenna is unimportant. It is enough to understand that as an antenna element is shortened the gain declines.

It is important to understand that this loss of gain for short antenna elements is not due to losses. What actually happens is that the pattern broadens such that less power goes toward the broadside direction. However it is also true that short antennas have lower impedances which require matching networks, and those matching networks can introduce noticable loss.

The 2-element wire yagis that I modelled have elements that are shorter than λ/2. I did note this at the time as an advantage since it allows the antenna to fit a smaller space. The reason the elements are shorter (0.41λ) is due to the inductive loading of the ladder line running from each element to the switch box. In comparison to a wire yagi with full λ/2 elements the gain of these switchable yagis is -0.3 db.

Thus we have -0.3 db due to I²R loss and -0.3 db due to element shortening, which sums to -0.6 db. The gain of a full-size 2-element rotatable yagi would therefore be 0.6 db greater than that for the 2-element wire dipole yagi on the chart.

It is interesting to briefly look at how these figures compare to the expected gain from a short rotatable yagi such as those made by Cushcraft and Force 12. The I²R losses are largely eliminated but the even shorter elements (~0.32λ and ~0.28λ, respectively) increase that gain reduction by about another 0.1 to 0.2 db, plus a small loss due to the loading coils. So if you were to put up one of these small commercial yagis you would see a gain (at the frequency it peaks) indistinguishable from the modelled 2-element wire dipole yagi (top line in the chart above) and only 0.6 db worse than a 2-element full-size rotatable yagi.

The 2-element loop arrays I modelled have not been through the "shortening" process to make them switchable. When I get around to doing so expect that the gain will be similarly reduced from that shown in the chart above.

You should expect that the impedance and resonant frequency of all the single-element antennas will change with height above ground. The rate of change is greatest at the lowest height. Loops and inverted vees are particularly sensitive to height since for a given apex height they get closest to the ground.

Tuning of 2-element yagis and loop arrays is less sensitive to height. Once the 40 meter beam's lowest point is higher than about 8 meters the impedance and resonant frequency hardly shift at all with further increase of height. The same applies to the frequencies of maximum gain and F/B. While this is a topic all its own I can summarize the reason for this useful attribute, one that applies to all yagis, quads and similar beam antennas.

As the gain of an antenna rises the solid angle of the main lobe(s) covers a smaller area of the far field. That is, the antenna "sees" less of the ground and other conductors that are not within the free-space lobe(s). With a F/B or F/S over 10 db anything behind or beside the antenna, respectively, farther than ~λ/4 is pretty much invisible to the antenna, and therefore does not appreciably interact. The same is true of the ground, though more so for the yagis than the higher-beam width loop arrays.

This is why yagi manufacturers can confidently state the exact dimensions of their antennas regardless of where it is to be installed. Further tuning just isn't required. This is especially true of the higher bands where the distance to ground and other conductors is farther in terms of wavelength.