I made passing references to high ground losses suffered by all of the limited-height, vertically-polarized 40 meters loop antennas in the recent series of articles on DX performance of 40 meters antennas. This is an important topic so I thought it would be interesting to delve more deeply into the subject with the objectives of attempting to quantify the loss contribution and, maybe, see if the loss can be managed. 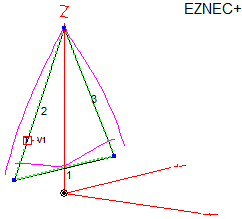 To do this I will standardize on the 40 meters delta loop antenna I am currently using. Its apex is 15 meters above a typical suburban lossy ground and vertically-polarized by being fed λ/4 down from the apex on one of the delta loop's legs. The adjacent current plot shows how the currents in the two legs are in phase and ideally configured to cancel all but the vertical radiation component. This is our reference for what follows.

To begin we had better be clear on just what we mean when we use the term "ground". Ground is not a magical box to which we connect our electrical supply and equipment for safety, where all the unwanted electrons are shunted off. Of course it can do this if we do it right. It can also help us avoid much of the damage of lightning strikes. Ground also reflects RF radiation and, ominously, absorbs and dissipates RF. Verticals are often said to need extensive radial systems as some sort of talisman to trick the ground into not eating RF.

In reality ground is just a very (very!) big lossy, non-resonant body that conducts, resists and reflects radiation, and it will do so not matter what. That is, ground interacts with all antennas, not just verticals, in both the near field and far field. It just happens that ground has a particular affinity to vertical E-fields and therefore can have a more pronounced impact on vertically-polarized antennas.

Consider the veracity of the following statements. You have probably heard (or spoken) one of more of these yourself.
All the above statements are false. Let's look at them one by one. 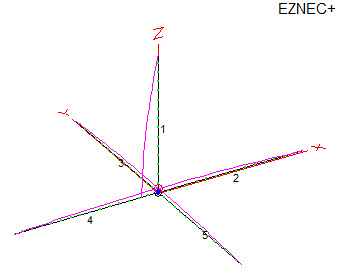 The currents in the elevated ground plane peak at the feed point just like in any vertical or horizontal dipole. The antenna is a λ/2 in length, with half of that vertical and half of that horizontal, though split 4 ways: the current in each radial is ¼ the current in the monopole element. It is the right angle between the antenna halves which give the ground plane antenna its low feed point impedance of 30Ω, not the ground.

With the antenna raised to 3 meters above ground (about the same height as the bottom of our reference 40 meters delta loop) the EZNEC-modelled ground loss is -5.5 db. This is almost identical to that for the delta loop and, for that matter, all the other close-to-the-ground loops and verticals I've modelled. As for its DX performance, it is awful: the gain at 10° elevation is -1.9 dbi, worse than every antenna in the recent summary article. The only remarkable thing here is that a vertically-polarized antenna such as a delta loop can be so competitive versus dipoles and inverted vees even though most of the radiated energy heats the earthworms.

Just to show that ground is not in play with the ground plane antenna I raised its height to 100 meters above ground (easy to do with software, though not in real life). The impedance dropped a few ohms, ground loss improved to -2.5 db, and the pattern remained omnidirectional, but gained several vertical lobes as happens with any high antenna. The ground plane antenna even works fine with just one radial, except that it becomes somewhat directive. Using 4 radials makes the pattern omnidirectional. A ground plane is similar to an inverted vee tipped on its side.

As I said, this loss of -5.5 db is also true of every low vertical antenna I modelled, which include full-size and shortened verticals. So that takes care of the second statement as well.

As for the final statement, horizontal antennas do indeed have loss. It's just that the loss is typically small, and therefore not often worth discussion. To give two examples, the reference 40 meters dipole and inverted vee reference antennas in the previous antenna comparison have losses of -0.6 and -1.2 db, respectively, at an apex height of 15 meters. The loss rises at lower heights and drops at greater heights.

In short, the factors which affect ground loss for any antenna at a particular frequency are:
To gain an insight to the magnitude of the loss I created an EZNEC model with two grounds. This is a nice feature of the software that allows the study of artificial ground treatments that affect antenna performance. 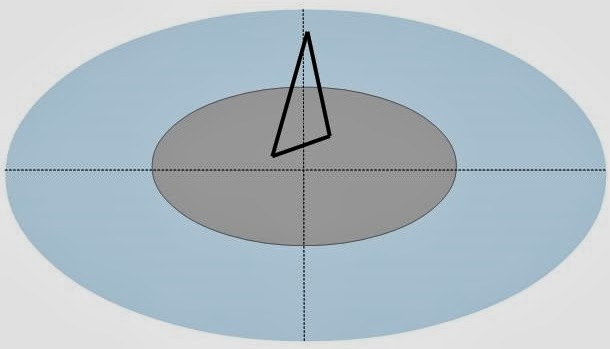 Each ground has its own set of characteristics: conductance, dielectric constant and height. They must be concentric, each with a fixed inner and outer radius. The outermost ground extends to infinity. I set the heights to zero so that they are coplanar. The test antenna shares the same origin as ground so the delta loop is centered above the ground plane.

The outer ground is the same medium ground I've used all along. For the inner ground I made some rough estimates of the characteristics of a metallic ground plane made of something like open-mesh galvanized steel chicken wire. Although I would never pave my yard with this stuff I wanted to make the experiment somewhat plausible. I chose a conductivity of 100 S/m (better than seawater but much worse than a solid metal sheet) and a dielectric constant of 10. Since the mesh is open the field associated with currents on the mesh penetrates the ground, which will therefore donate some of its dielectric attributes to the ground plane. The specific numbers are not critical, which I tested with a range of values for these ground characteristics, so don't worry too much if you disagree with my numerical choices.


I should point out that a set of radials under the antenna is not equivalent to the mesh described above. I tested several of these antenna with a ground plane made up of a small number of short and long radials. It takes a lot of these non-resonant radials before an appreciable effect is seen. Unless you are committed to laying 100 or more of these on or in the ground (as done by AM broadcasters and some 160 meters enthusiasts) it won't help much. It takes a lot of metal to make an effective ground plane.

I then ran the model through EZNEC, measuring the loss, and the gain and elevation angle of peak far-field radiation, varying the ground plane radius from 0 meters (no ground plane) out to 100 meters (2.5λ). Here is a plot of the results.

As you can see the loss is acutely dependent on the extent of the metal ground plane, improving from -5.9 db to -1.0 db. The affect of the local ground on the antenna's net efficiency is plain to see.

The elevation angle where the broadside lobe peaks gets lower -- better for DX -- as the ground plane grows. A bump centred at a radius of 10 meters might be surprising but is easily explained, as I'll do further along in this article.

The plotted gain is for the elevation angle peak radiation not the 10° I've used in the analyses until now. I made this choice to give a sense of how the pattern shape changes with the increasing ground plane radius. The gain at 10° is also increasing but is not plotted. At a radius of 85 meters (coincidentally, 2λ) the peak is at 10°, and the gain is far superior to even the previously modelled 2-element yagis up 15 meters. Unfortunately this requires several acres of property, all covered with metal mesh! It's cheaper and easier to put up a dipole or yagi on a taller tower.

Let's look at the mechanics of how these performance figures are generated. It has much to do with the construction of the far-field gain.

The far field is the vector sum of the sky wave and ground-reflected wave. If the reflected wave does not undergo a phase shift, at low angles the two waves (with the same final elevation angle) have approximately the same phase and reinforce each other. As you may know there is an angle, the Brewster angle, determined by ground characteristics, below which the reflected wave is phase-inverted. When this happens the two cancel. That is why antennas, vertical and horizontal, always fail as the elevation angle approaches 0°. 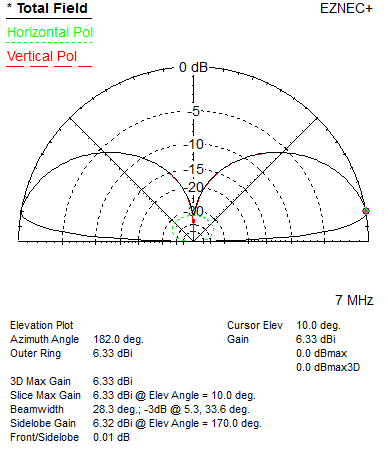 The elevation angle where the lobe peaks also drops as ground conductance rises. If you can't pave the planet in metal your next best choice is an island in the ocean. That's why so may DXpeditions to islands, such as the recent FT5ZM operation, can have unbelievably great signals even on the low bands. With just 10 watts and a delta loop I was able to work them on 40 meters.

When the ground reflection at a particular angle is off the metal ground plane the loss and phase shift are small. You can see this effect in the adjacent elevation far-field plot. In this instance the ground plane radius is 85 meters, which is where the space wave from the top of the delta loop at 10° is reflected.

Notice the sharp drop in gain below 10°. Those involve reflections from the beyond the metal ground plane.

As hinted above this also explains the elevation angle bump at a radius of 10 meters. With no ground plane (radius of 0) the ground is consistently medium and behaves as we have come to expect. As the ground plane is extended outward the first low-loss reflection is at a steep incident angle from the bottom of the antenna. As the radius continues to be extended the lower incidence angle reflections from more of the antenna are off the ground plane. At 85 meters the entire antenna can illuminate the ground plane at a downward angle of 10°. It's straight-forward geometry.

I suppose one possible recommendation is to measure off 85 meters from your antenna in the direction that matters most for your DXing activity. Determine which neighbour that is, knock on their door and ask if you can pave their yard with chicken wire. For free! People like free stuff. 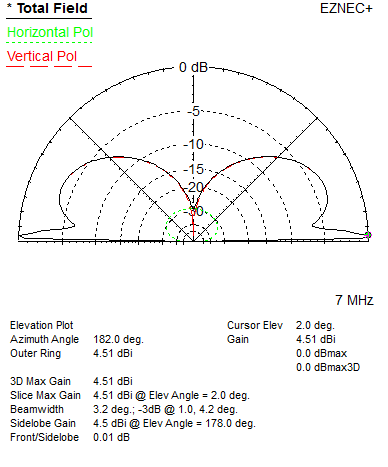 To close off let's pretend that we are the ones on an island DXpedition with a delta loop. We edit the model by reversing the two grounds, with the inner one becoming a medium ground (or worse if the island is rocky) while the outer one is seawater. I put the antenna in the centre of a circular island that is 200 meters across (100 meters radius) and 5 meters above sea level.

As you can see the elevation plot is noticably odd. There is an excellent but narrow peak at 2° elevation but with a node at 10° and lots of radiation at high angles where the poor island ground comes into play. Loss is also substantial, not much different from not having the ocean there at all; the shore is too far from the antenna to counter most of the ground loss.

A simple vertical would likely do better since it would not have as much high-angle radiation as the delta loop. The loss, however, is not so easily defeated. Unless you buy the island and pave it with metal.