The previous article on diamond loops ended by summarizing in a chart the performance of a number of single-element wire antennas for 40 meters. These included the dipole, inverted vee, delta loop, diamond loop and chevron loop. Over several other articles in January I designed and modelled switchable 2-element wire yagis made from dipoles, inverted vees and inverted vees in a diamond configuration. This article will round out this investigation of 2-element 40 meter parasitic arrays made from full-wave loops.

I titled this article a "survey" since these will not be complete designs. In particular there is no attempt to match these antennas to 50Ω coax or to make them switchable between the two broadside directions, as I did with the wire yagis. I am delaying those tasks until after I am in a position to select the best candidate(s), and therefore reduce the risk of wasted effort.

From what I have found there is less reliable and comprehensive design and performance material for low-bands loop arrays out there. That is, there is a large number of designs but the modelling data is often threadbare and comparisons among alternatives is sparse or incomplete. So rather than blindly trusting what I can find I chose to do my own modelling and comparisons.

My design criteria are as follows:

From left to right are the EZNEC views and antenna currents of the 3 loop arrays being surveyed: delta, narrow diamond and chevron.

For the purposes of this survey the antennas were designed in an easy and straight-forward fashion. I first followed the rule-of-thumb that to make a 2-element parasitic array with a reflector and driven element one first designs a single element antenna for the selected frequency and environment and then duplicate that antenna and place it behind the driven element. The resulting array will have its maximum gain very close to the frequency of the single-element antenna.

From there I moved the parasitic element back and forth to simulate boom lengths from 3 meters (0.07λ) to 9 meters (0.22λ). At each meter separation (boom length) I looked for the maximum forward gain and front-to-back (F/B) in the EZNEC model.

The gain at the shortest boom lengths is reduced by I²R losses in the wire. At close spacing the antenna Q increases and the resistance at resonance drops, resulting in -0.5 db or greater loss. This is especially true of the chevron which is already high Q and low resistance (22Ω) as a single element. The delta loop is least affected by short booms. In fact the delta loop array performs remarkably well at boom lengths as short as 4 to 5 meters. Compare this to 6 meters (0.14λ) for the wire yagis.

The chevron array achieves maximum gain with 9 meters spacing, although the F/B continues to improve at greater spacing. I did not bother to find out where since that is far too long a boom. The chevron array has other problems which I'll come back to, and which discouraged me from trying too hard to optimize it.

The narrow diamond array shows the best overall performance of gain and F/B at reasonable boom lengths, with 7 meters (0.17λ) the best.

Not shown in the above plots is how the boom length affected the frequencies at which maximum gain and F/B were found. Without getting into detail I'll summarize the effect in a few broad points. Keep in mind that in all cases the loop element sizes and heights are kept constant.
With this information in hand I proceeded to more fully evaluate the models for each of these arrays. I set the boom lengths to the optimum lengths for each and used EZNEC to model their gain and F/B across the 40 meters band. In all cases the maximum gain is positioned at 7.000 MHz. 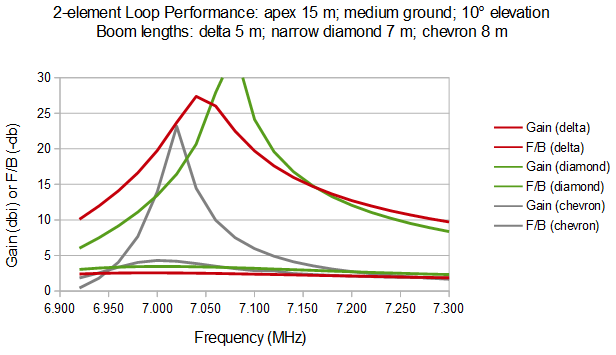 Since the gain and F/B curves are easily distinguished I made the colours of both curves for each antenna the same. As with the wire yagis I continued the curves below the band edge (to 6.920 MHz) to give an idea how the antennas would perform if it is moved up to a higher frequency such as to perform better on the SSB band segment. For example, assume that 6.9 MHz is really 7 MHz and proceed from there.

Although the gain curves are compressed you can still  see how they gradually degrade at higher frequencies. Maximum gains (at 7.000 MHz) are as shown in the first set of charts (above) for the selected boom lengths. The degradation for the delta loop array is from a maximum of 2.56 dbi at 7.0 MHz to 1.87 dbi at 7.3 MHz. For the narrow diamond array these figures are 3.47 dbi at 7.0 MHz and 2.32 dbi at 7.3 MHz. The delta loop degrades less but from a lower maximum. The effect is more pronounced for the chevron loop array: from 4.31 dbi down to 1.84 dbi.

The delta loop shows the best behaviour across the 40 meters band, with the least degradation of gain and high F/B. The F/B performance of the delta and narrow diamond arrays is superior to all the wire yagis previously modelled, both in magnitude and bandwidth. The chevron array is the worst, with a narrow bandwidth for both gain and F/B.

The narrow diamond array looks quite promising since its F/B performance is excellent (though not as good as the delta loop array) and has superior gain over most of the band. Maximum F/B is only ~20 kHz higher than maximum gain, which is nearly coincident. However this configuration has a 7 meter boom (23') which could be a hindrance in some installations. If the boom is shortened to 6 meters there is some loss of performance, which may be an acceptable trade-off. This impacts would be peak F/B reduction of 9 db and peak gain loss of -0.03 db (negligible). 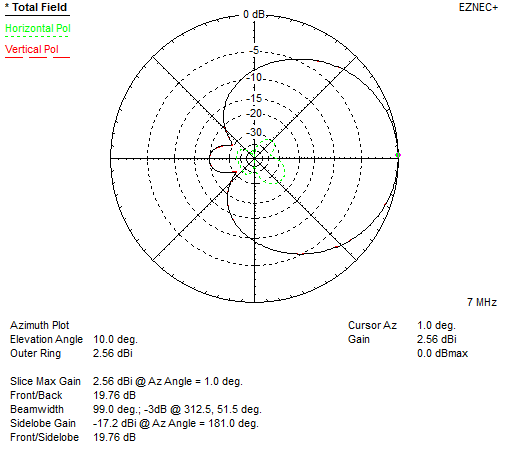 Another consideration with these arrays is beamwidth and front-to-side (F/S). Regardless of the array type the core element configuration (dipole, inverted vee, delta, etc.) strongly influences these figures. A dipole has a sharp side null so the wire yagi also has a sharp side null. A loop is more omnidirectional so we should expect that the loop parasitic array will display more F/S gain.

This is confirmed in the models. The adjacent azimuth plot is for the 2-element delta loop array at an elevation angle of 10°, a boom length of 5 meters and an apex height of 15 meters.

The F/S of a single-element delta loop is approximately -3.5 dbi. In the array the F/S increases to -6 dbi, only -2.5 db lower. Not surprisingly the beamwidth is also wide. A switchable delta loop parasitic array would have no coverage gaps, just reduced performance off the sides. The narrow diamond and chevron arrays have higher F/S since those loops are less omnidirectional than the delta.

Notice that the azimuth pattern is slightly asymmetrical. Gain is ~1 db higher (-1 db F/S) on the side containing the feed point. This may be due to wire losses which reduce the current on the opposite side of the elements.

Parasitic loop arrays with 2 elements can be excellent DX antennas at low heights. The low-angle forward gain of these antennas is approximately 3.5 to 4 db greater than those with one element. This compares favourably with 2-element wire yagis that typically exhibit a forward gain of 4 to 5 db over their single-element equivalents. Gain differences vary with height within the above-quoted ranges.

F/B performance is much better than for wire yagis. Even better are their gain and F/B bandwidth. F/S is poor, which could be seen as a problem (QRM rejection) or a boon (azimuth coverage) depending on individual circumstances.

The single-element chevron loop performs well, but is quite poor when employed in a 2-element parasitic array. I'm tossing this design into the trash. Delta and narrow diamond loop arrays are most promising so that is where I will concentrate any future effort on this class of 40 meters antennas.

Both the delta loop and narrow diamond arrays look sufficiently interesting to justify further work. This will primarily entail a matching network and switching arrangement similar to what was done for the wire yagis. Impedance matching should at least be easier since the resistance at resonance is higher than for the wire yagis, closer to the desired 50Ω.

However, first, probably in the next article I'll review all single and 2-element 40 meters antennas I've recently modelled and documented in this blog to compare their performance, with particular attention to height above ground.

I am also tempted to try a 3-element loop array by adding a director. That will probably have to wait a long while since such an antenna is not in my plans for 2014.

Update Jan 30: The large performance chart above (as previously mentioned) compresses the gain figures since these numbers are much smaller than those for the F/B. I'm not satisfied with that. In the chart below I plotted just the gain figures to make them more presentable. 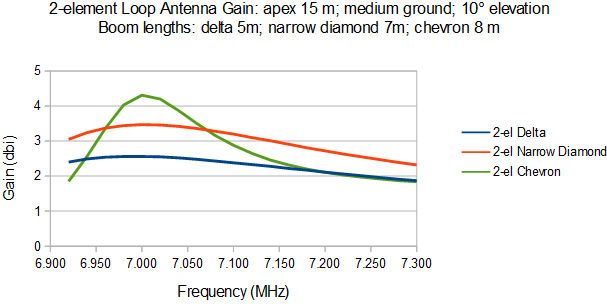