When the antenna mast at Site-B (house-bracketed steel pipe) broke and came down, along with the multi-band inverted vee, in early December I expected to have it replaced within a couple of weeks. That didn't happen. What did happen was an exceptionally snowy and cold December, making any antenna work impossible. 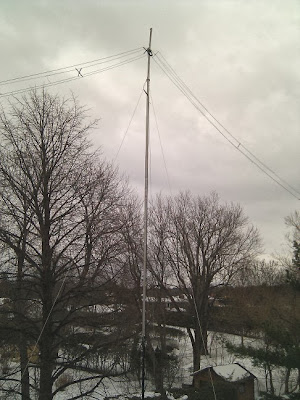 With the recent thaw the rebuilding effort is complete, as the accompanying picture demonstrates. I'll take you through the steps I took.

While waiting for a mid-winter thaw that stubbornly failed to materialize I did what analysis I could of what went wrong and how to rebuild it so that it would last. There were two contributing factor that I was able to determine:
The two factors are not independent. As the rope stretched it put more bending force on the mast. The stress would be at its maximum at the bottom where the fibreglass mast nests within the (unyielding) steel pipe. I suspected a problem before the mast failed since some noise came from this area when the wind was gusting. I just didn't realize how serious the problem was going to become. 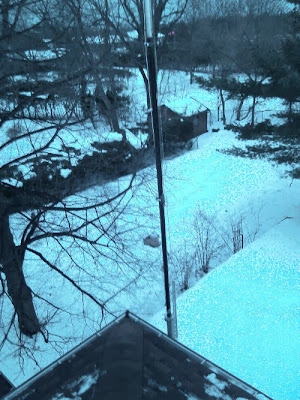 Version 2.0 of the mast addresses both problems. First, I replaced the fibreglass with an 8' length of 18 gauge galvanized steel fence post. Although I made a modest effort to see what the local stores had in the way of suitable conduit, pipe and fencing steel there was nothing of a size that was a good fit to both the aluminum mast (1.5" OD and 1.375" ID) above and the steel pipe (1.61" ID) below.

For the bottom fit I used several layers of aluminum flashing as a shim to raise the fence post's outer diameter of ~1.4" to be a close but not too snug fit to the pipe. Some play is necessary since it is difficult to insert the mast when you have are holding the entire 8.5 meters length of mast above your head while it wobbles in the wind and balancing on the edge of the roof. Safety lines ensured that I would not be injured but it is still a tricky operation.

I used a circular saw with an abrasion disk to cut two slots at the top end of the fence post. A smaller diameter steel pipe with (more) aluminum shim was placed within the post and then compressed with a muffler clamp. The shim and inner pipe also fit within the aluminum mast for a snug press fit. A steel hose clamp was tightened at the bottom of the mast to strengthen (but not compress) it at this stress point (see below).

All of this fabrication was done indoors, where I was snug and warm. I used a plastic Schedule 40 pipe with the same dimensions as the steel pipe as a proxy for the fitting. The end section of the aluminum mast was brought indoors for the same purpose.

The second problem was simply addressed by replacing the dacron rope stay with ⅛" aircraft cable. Although the cable does not stretch some pre-load is needed to ensure the mast stays vertical when the tension of the antenna pulls the stay taut.

The picture above is not too detailed but hopefully it is clear enough to see the couplings. A close-up of the top of the post is visible in the picture at right.

The clamp at the bottom of the fence post holds the aluminum shim in place and serves as a mechanical stop to ensure the post slides into the pipe the correct distance. In the middle of the post the protrusion you can see in the first pictures is a rope cleat that makes it easy to secure the antenna pulley rope in a couple of seconds. Previously I had to tie the rope to a bracket or clamp. This was too time consuming since the antenna went up and down multiple times to tune the antenna and make mechanical adjustments.

The operation to install the new mast took 3 days. More precisely the elapsed time was 3 days although the work involved was only a couple of hours.
When the mast failed 6 weeks ago the bottom section of aluminum tubing ending up with a smooth bend. Try as I might I was unable to straighten it. The aluminum alloy used in antenna masts and booms is very tough stuff. Doing so in any case can be dangerous since aluminum and aluminum alloy can easily fatigue and weaken when trying to undo the first damage. Since it proved so resilient to my repair attempts I decided it is more than strong enough to hold up itself and the antenna, forces which are less than what I subjected it to during my failed repair attempt. The slight hook at the top of the mast looks a bit odd but this is only a cosmetic flaw.

With that major repair operation taken care of I climbed the tower to turn and retighten the TH1vn multi-band dipole to its mast. A couple of strong wind storms spun it so that it favoured the polar paths, but put Europe in its side node.

This spate of mid-winter antenna work should suffice for the rest of the winter, including the upcoming ARRL DX contests.