The delta loop is a popular low band DX antenna with its omnidirectional pattern and low-angle radiation, and requiring only a single high support. That is, when fed for primarily vertical radiation λ/4 from the apex or a bottom corner. That is the antenna I currently use for 40 meters, using a single support up about 15 meters. It works well, or at least as well as it can with QRP (85 DXCC countries in 3 months).

There are other 1λ (full-wave) loop configurations that do equally or better than the delta loop, and also require just the one high support. One of these is what I choose to call the chevron loop since it is in the shape of a chevron. I'll compare the chevron loop to the delta loop and another loop configuration -- diamond square -- for comparison.

First however I'll mention what led me to this antenna. I wanted a loop that, like a delta loop or inverted vee requires one high support. It also had to be a full-wave loop to, I hoped, have gain over a delta loop at low elevation angles. To this end I folded up a loop like a stacked inverted vee to put the bulk of the wire as high as possible. It was then a simple matter of crunching the numbers through EZNEC. Whether a loop of this configuration has been explored by others, or in its vertical polarization feed, I cannot say.

Now on to the modelling and results. 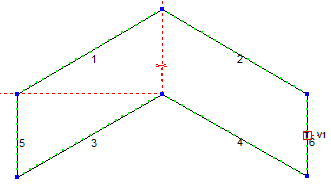 As a horizontal antenna it performs similarly to a inverted vee with the apex somewhat below the true apex. Since this is not what I need for DX performance I will focus on vertical polarization.

The gain does not come for free. The gain off the sides (antenna plane) is reduced by several db in comparison to the delta loop so it is not a truly omnidirectional antenna. It becomes more important to supplement the loop with another antenna to fill this hole in the antenna's azimuth coverage. The vertical pattern is also slightly sharper. This is good for DX and not so good for short path performance. Your operating preference determines whether or not the pattern is a problem.

The loop itself is more complex as well. That, too, is a disadvantage though not one that is too demanding if you can deal with 4 tie points. It is necessary to "spread" each pair of tie points so that the vertical segment is under tension. Both apexes should be offset from a metal tower by at least 1 meter to reduce coupling and therefore affecting tuning and, if the tower is resonant near 7 MHz, the pattern. This latter is a concern with any vertically-polarized loop.

The loop's horizontal extent can be shortened but with a consequent impact on its performance. I won't go into extensive detail in this article except to say that the particular loop geometry is the result of some experimentation with EZNEC to find the shape that is a reasonable compromise between performance and matching difficulty. The chevron loop is more difficult to match than other loops and, as you'll see, has negative side effects.

Any full-wave loop reduces to a folded dipole as the interior area is reduced to zero. The chevron loop I've designed is halfway there so we do see that impact. In particular, when horizontally polarized the impedance is in the range of 220Ω to 250Ω depending on height and which apex is fed. A folded dipole is nominally 288Ω, an excellent match to 300Ω ladder line.

If you feed a folded dipole at one end you would expect disaster since the long horizontal arms have the same current and opposite phase. It is in effect a shorted open-wire transmission line. The situation is not so simple in the chevron, yet the same effect is present to a degree. Let's look at those currents. 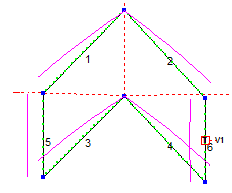 The currents in the horizontal arms cancel to a large degree since the currents are of similar magnitude and opposite phase. The chevron loop for 40 meters with an apex at 15 meters has a feedpoint impedance of 22Ω when fed at the centre of a vertical segment.

It isn't difficult to match this low impedance to 50Ω coax. Perhaps the simplest method is a quarter-wave coaxial transformer made from two parallel lengths of RG-59 or RG-11. A beta match is also a good choice. However the impedance is not the problem with this antenna but rather with what the low impedance implies. All that current cancellation has more serious consequences. Recall that a full-wave loop has an impedance between 150Ω and 200Ω so this is quite the large reduction.

The chevron is a high-Q antenna, which is unlike loops with a more open interior and high feed point impedance. To get the antenna to work well in the CW segment of 40 meters the SWR is above 3 right across the SSB segment. Tuning is also more critical so you'll have to be careful when trimming the antenna to the correct resonance. The mismatch away from resonance is so high that a transmatch would have to be employed since most modern rigs' internal tuners will not be able to deliver a match.

As modelled, the 2:1 SWR bandwidth is 90 kHz. Battling the SWR down to exactly 1.0 at resonance does not improve the bandwidth since the reactance dominates the resistance (Z = R + jX) away from resonance.

A less obvious problem is the I²R losses in the antenna wire. I modelled the antenna with 12 AWG insulated copper wire which results in -0.5 db loss in comparison to lossless conductors. This compares to a negligible loss of -0.05 db for the typical open loop such as the delta or quad. Heavier wire can reduce the loss but after doing some substitution I concluded it was worth neither the expense nor the additional weight. 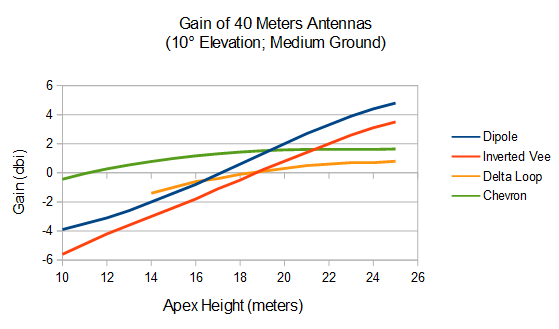 One remarkable and attractive attribute of the chevron is its performance at low heights. At apex heights below 15 meters it really shines in low-angle radiation in comparison to alternatives (the plot up above has been updated from earlier articles). With an interior angle of 120° the apex can be low as 10 meters (bottom corners are at chest height!) and still do well. This is despite the high ground losses when placed so low.

However at greater heights the chevron loop performs poorly at low angles. The reason is that it develops a large high-angle lobe, one that equals the lower lobe when the apex reaches 25 meters. This pattern is shown at right. 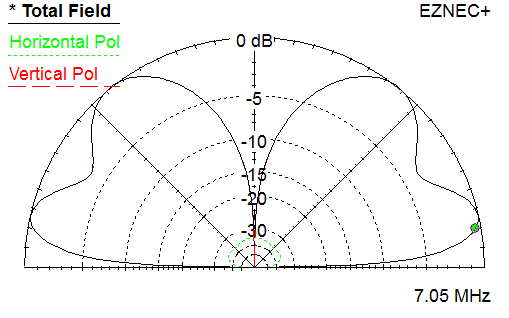 Is a chevron loop a good choice for 40 meters DXing? That depends. If you are height limited or at least want to reduce interactions with a high-bands yagi at the top of a tower that is 20 meters tall or less this antenna might suit the bill. I am tempted to make an experiment of it this summer and see if it works as well in the real world as it does in the model. It is not that I doubt EZNEC and its NEC2 core but rather that at lower heights there is greater interference from neighbourhood obstructions and housing metals (wiring, eaves, etc.). Even so the interactions should not be any worse than with my existing delta loop antenna.

I have other loops in the modelling pipeline, some of which I'll discuss in the future. I also intend to build various vertically-polarized loop arrays and compare them to the horizontal wire yagis I recently explored. With the cold wind howling outside it's a pleasure to build antennas on a computer than outdoors.