Construction Notes on Those Wire Yagis

In my preceding articles on the design of wire yagis for 40 meters -- dipole elements, inverted vee elements, inward-turning vee (diamond) elements -- I skipped over some important and useful construction details. That was deliberately done so that I could focus on the more important general design and performance aspects of these antennas.

To close out this series I will discuss these omitted topics. For the most parts they are presented as sets of options rather than one strong recommendation. Choose what works for you, provided that you do not take a lazy shortcut that can impact performance. Construction details, although not provided, should be straight-forward for most hams. You should just keep in mind that antenna arrays (2 or more elements) require attention to detail or all the painstaking effort can be for naught. It takes only one small mistake to erase the yagi's performance advantage.

I don't plan on reprising the design notes made in the yagi articles so you should review those (at the above links) as well as the list below.

In the design articles the switch box used to reverse the antenna pattern is placed midway along the boom. That preserves array symmetry and, in most cases, places the switch box at the tower where the boom is likely to be side-mounted. This is an ideal location for robustness, tuning and maintenance.

The switch box itself can be metal or plastic. I've used both in the past. Plastic is probably best since modern plastics are very tough and easy to work with. They also do not interfere with electrical performance of coils and ladder lines. 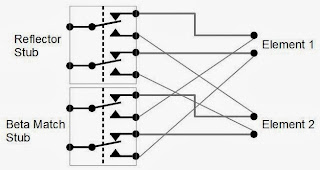 The relays should be low-voltage DC, with internal construction and contacts suited to the power and frequencies. Internal switch box wiring (the schematic from an earlier article is copied at right) and relay construction will add effective length to the ladder lines and tuning stubs so keep that in mind when laying out components.

The relays can be powered via a thin gauge, 2-wire cable or the coax feed line itself. There are many simple designs and commercial products available for the latter choice. If you do use a separate power cable you should employ current chokes in the same manner and locations as the coax. At the very least use a section of cable wound into a choke coil that is effective at 7 MHz.

Use a plastic or fibreglass non-conductive boom to minimize disruption to the performance of a rotatable high-bands yagi above the 40 meters fixed yagi, and to the ladder line runs from the elements to the switch box. In the past I have used 1.5" (nominal) Schedule 40 ABS pipe for the 6 meters long boom, with a steel or aluminum centre section and a simple rope truss to counter the downward force applied by tension in the wire elements. Only the one truss is needed to stabilize the boom since, with the 2 half elements we have the equivalent of 3-point guying. 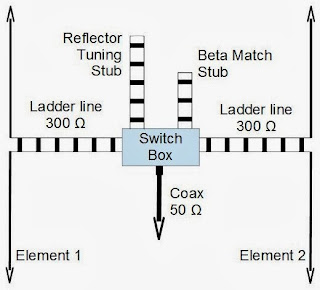 If the ladder line passes the metal section of the boom keep the line at least 10 cm away and parallel. It is better to run the ladder line underneath the boom to reduce rain and ice loading and to avoid inadvertent sagging onto the boom.

All of these wire yagis designs employ transmission line stubs to tune the parasitic element (reflector) and drive impedance (beta match). I did this to keep the design and (theoretical) tuning process conceptually straight-forward. This is not necessarily nor always advisable in practice.

There are two significant concerns with using stubs: tuning and interactions. There is no way to tune these stubs except by cutting, adding or replacing. The potential for detrimental interactions comes from the need to put the stubs where they won't coupling to each other, the tower, the boom and anything else nearby.

One popular method (and one that I've used in wire yagis) is to construct a tunable stub as shown in the adjacent diagram. You need to use open wire line with bare inductors. For minimal interaction run these downward, perpendicular to the boom and parallel (but not too close) to the tower. Brace the stubs at the bottom so they don't move in the wind. 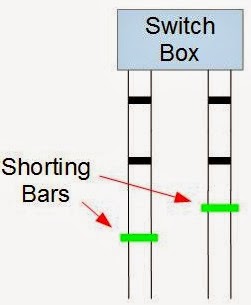 The stub length should be changed if the open wire line is other than 300Ω. The required length is, roughly, in inverse proportion to the design length, which was based on 300 lineΩ.

Alternatively you can use coils in the place of stubs. These can be put inside the switch box for weather protection. Make these air-core coils of rigid, bare copper with a inductance 25% to 50% greater than required by the design. The stubs in the preceding yagi designs have an inductive reactance of around 1.0 to 1.3 μH, so make the coils 1.5 to 2 μH. The coils should have one end open and have at least 10 turns. Tune the coils by moving the tap point. No matter where within the box you place the coils it is good practice to mount them at right angles to each other to minimize coupling.

The antenna design is deliberately made symmetric to equalize performance in both directions. Some asymmetries will inevitably creep into the antenna when built, and that can result in current imbalances. Use of a common mode choke -- balun or coax choke -- at or near the switch box limits the impact and also helps to eliminate conducted and induced current on the feed line from disturbing the antenna pattern. The main impact is F/B since it is highly sensitive to current phase and amplitude.

Additional chokes along the feed line can ensure that no resonant section of feed line appears anywhere along its length. With inverted vee elements especially it is likely that there will an opportunity for interactions.

Now comes the real test: you've built the antenna, raised it into the air and you put RF into it. No matter how careful the design and construction there will be real-world effects that will alter antenna performance. This includes everything from stray inductance within the switch box to ground conductance, metal (house wiring, gutters, etc.) in the vicinity and obstructions of all kinds. In other words, the antenna must be tuned.

Before you proceed to tune the antenna ensure that the wire elements are properly tensioned and in their correct positions. A little extra sage will, at the very least, shift resonance. Yagis and antennas for higher bands on the same tower are far more likely to be affected by the 40 meters yagi rather than the reverse. Therefore for the present objective we can ignore this particular interaction. But be sure to test the high-bands yagi for acceptable performance in all compass directions.

To begin, find the frequency where the SWR is minimum. Don't worry about the exact value for now, provided it isn't extremely high. If the found frequency is farther from the design frequency than you'd like you should calculate the percentage error and trim or add to all four element halves. For example, if an element half is 8.8 meters long and it resonates at 7.1 MHz rather than 7.05 MHz, the element halves should be lengthened by 100 x 50 / 7100 = 0.7%, or 6 cm. Typically you only have to do this trimming once, or twice at worst if you're careful. After trimming check that the SWR minimum is now at the correct frequency.

Next, we proceed to tune yagi gain and F/B. We do this by concentrating our effort on the F/B, not the gain. The gain curve is too flat to allow for accurate peak tuning. The F/B peak is relatively sharp.

Look at a local or great circle map to find the locales that are broadside to the antenna in both directions. If convenient you can use a local ham who is suitably located. Although not equivalent you can get close to correct tuning of the far-field sky wave by using ground wave or space wave. Back in the day (1990) I had a variety of short wave broadcasters to use as test signals. The best was the ideally (though illegally) placed Radio Tirana at 7.065 MHz. Today, alas, those antenna test beacons are gone.

Toggle the direction switch. You should see some difference in performance on test signals. That will confirm that it is (mostly) working as intended. Now take your friend up and down the band (or find other stations on other frequencies) and measure the F/B. Find the approximate frequency where it peaks. If this frequency is incorrect you will need to climb the tower and tune the reflector stub (or coil). Add or subtract inductive reactance to move the gain and F/B peaks down or up in frequency, respectively. Repeat this procedure until you get it right. You can use EZNEC or other software to determine how much to change the reactance to shift the frequency the desired amount.

When the F/B peak is at the correct frequency the peak gain will also be at the correct frequency. But test to be sure the gain and F/B performance are as they should be in both beam directions. If they are not you must have some asymmetry in the construction or with obstructions and conductors in the antenna's near field. Don't obsess over perfection but do address any serious shortcomings.

The last step is to adjust the beta match stub (or coil). You want to find the position where the SWR is 1.0 at the design frequency, which is where you trimmed the antenna for minimum SWR. If the frequency where the SWR is 1.0 has shifted too far you will need to go back and repeat the tuning procedure, starting with trimming the element halves.

That's all I have on 40 meters wire yagis for now. I have other design ideas for 40 meters antennas, both single elements and arrays, that intrigue me with their potential. More on those in 2014.