If you are familiar with Spiderbeam and HexBeam commercial wire yagis for the high bands you will have noticed that they sweep the reflector and director elements inward at the ends. This allows a lightweight design through the use of wires rather than self-supporting tubular elements. The general principle is not new, having first run across it myself 30 years ago in the work by the late Les Moxon, G6XN, in his book HF Antennas for All Locations published in 1982 by the RSGB.

There is a price to be paid with such a design. First, the element interactions can prove problematic. Any metal placed near the end of a dipole will couple strongly and will certainly change element resonance. When that metal is another yagi element the impact is greater, including yagi performance characteristics.

Second, the centres of the parasitic elements must be moved outward to compensate for the folding since the point of average current is located inward. The same thing occurs with an inverted vee antennas and is the major reason why its low-elevation angle gain is less than a dipole whose centre is at the same height. This accounts for the average -1 to -1.5 db gain for the 40 meters yagi I modelled with inverted vee elements versus the one with dipole elements. The average height of the antenna currents in the inverted vee yagi is 1.5 meters lower than the one with dipole elements which at 0.6 db/meter accounts for much of the difference.

The 2-element wire yagi for 40 meters I had in 1990 was of the type with inward-folding inverted vee elements. Although I could not model the antenna back then to explore its performance I was intrigued with the general idea. I folded the elements inward and then tuned the elements to optimize its performance. I did not have someone else's design to work from.

For the present exercise I can use EZNEC to explore this class of wire yagis. My first step was to simply fold inward the inverted vee elements of the yagi described earlier. A new design parameter has also been added: the separation of the elements at their ends. There are a couple of things we should expect to see, even before we jump into the detailed design:
Unlike the previous two yagi designs there are more variables and calculations in the model. The most troublesome is finding the positions of the element ends as the boom, separation, vee angle and wire length are changed. EZNEC's scaling and rotation features are difficult to use, and usually more trouble than they're worth. You almost never get what you actually want. Instead I designed a spreadsheet which takes care of the trigonometry and algebra to get the X, Y and Z values to plug into the EZNEC wires table. 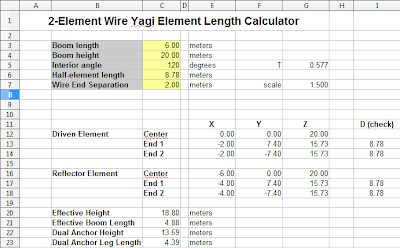 Above is an image of the spreadsheet for this model of the "diamond configuration" yagi. The variables to be entered are in gray/yellow and the wire ends are calculated in a form ready for EZNEC entry. The effective antenna height and boom length are also calculated. Notice that in this configuration the effective boom length has been shortened by more than 1 meter. This will impact yagi performance. 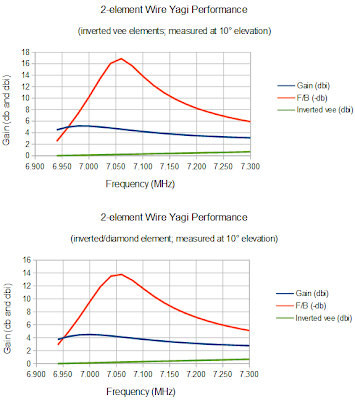 I followed the tuning procedure described in the first article in this series. The performance of the diamond configuration yagi is shown at right, and that of the previously-described inverted vee yagi for easy comparison.
Each element half for this yagi is 8.77 meters long. The boom is 6 meters and the element-end separation is 2 meters. The beta match stub is 0.82 meters long and the reflector stub is 1.15 meters long. The direction switching system is as in the first article in this series.
Although the performance loss is small there is still the question of why do this at all? Unlike the case with a commercial rotatable antenna such as the Spiderbeam there would appear to be no good reason to fold in the elements of this fixed wire yagi. I will come back to this, but first let's look at the final performance parameter: SWR.

As expected the 2:1 SWR bandwidth has shrunk to under 100 kHz. To keep the SWR below 2 at 7.000 MHz I had to move the resonant frequency downward by about 20 kHz. As before the antenna is tuned for maximum gain at 7.000 MHz, since this continues to provide the best balance between performance and match for primarily CW operation.

The SWR impact is arguably the only deleterious impact of folding the elements into a diamond shape. Gain and F/B can be largely restored by increasing separation of the element ends, extending the boom, or some combination of both. However, while increasing the boom length can restore the effective boom length to what is was with parallel element the same gain cannot be achieved. In concert with the boom length the ladder line between elements and switch box must be lengthened, and the elements shortened. Shorter elements lower the achievable gain. Aside from matching considerations the gain of a λ/2 dipole is 2.13 dbi, which gradually declines to 0 dbi in the limit of zero length. The same applies to yagi elements.

On the other hand the diamond wire-yagi configuration does have advantages: 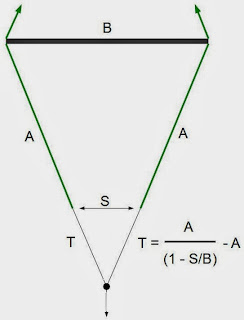 The design parameters I chose for the diamond configuration I described above are a reasonable compromise between performance and robust construction. I am not posting the EZNEC files and related spreadsheets, however I will happily supply them to anyone that asks. You can then play with them to come up with designs suitable to your individual circumstances.

In a future article, probably the next one, I'll say a little more about construction of the 40 meters wire yagis from this and previous articles.