In an earlier article I discussed the ramifications of common-mode currents on the coax feeding a nested delta loop antenna. I used EZNEC for that demonstration and also referenced other material. Since my guest room is free once more I decided to deal with a persistent problem I had when I reassembled my temporary station (which took all of 10 minutes).

Unbalanced antennas are very prone to currents on the outside of the coax. This can be used to good effect when making the coax part of the antenna, while at other times it is a pattern-altering, RFI/EMI-inducing nuisance.

Loading the aluminum eaves trough with a tuner is very much an unbalanced antenna system, and there are unwanted currents on the coax. This does not compromise the antenna pattern much, sadly deficient as it is. But since the KX3 is less than 3 meters of coax away from the tuner (antenna feed point) that current does wreak some havoc.

The reaction of the KX3 to the current is quite stark: it aggressively folds back the power. With only 10 to 12 watts available (8 on the highest bands) the power reduction can be a problem. I am ok with QRP but QRPp with this poor excuse for an antenna is more painful than I like. I could only go up to 5 watts on 15 meters and 3 watts on 10 and 6 meters. 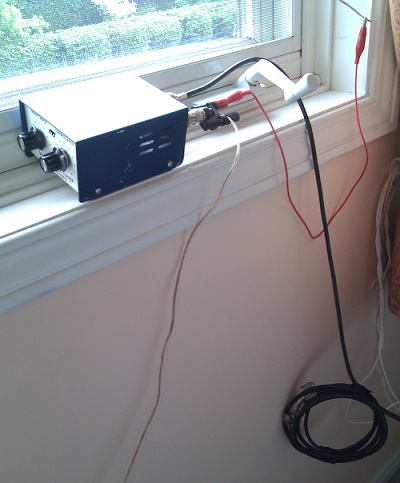 I grabbed a 1 meter long RG-58 patch cord from my box of cables and added it in line (with a T-connector, which was the best I had) to add the slack I needed in the transmission line. I then made a coax choke from that slack, which worked out to a 6 turns coil with a diameter of 12 cm. I proceeded to tune and test the altered antenna system on all bands from 20 through 6 meters.

Even with this suboptimal coax choke the results were remarkable. The RFI incursion into the KX3 became negligible. When matched with the tuner, the rig now puts out full power on all bands. Not only that, the KX3 exhibits no audio artifacts on QSK and the SWR behaviour is smooth, not abrupt, when adjusting the tuner. Antenna current now appears to be staying where I want it, on the wire counterpoise and antenna proper.

The lesson here is that perfection is a laudable objective, but don't let that stop you from trying something of lesser quality. Experiments like this are cheap and can have a large benefit. Coax chokes are not ideal since they are reactive and therefore cannot cover all the HF bands. However they can work well. If one doesn't it's easy to add or subtract a few turns. There really is no excuse not to have a choke on your coax transmission lines.

In the interaction article I pointed to a comprehensive discussion on the choking of common-mode currents on transmission lines by K9YC. There are examples in there that are quite good (high resistance), but that require ferrite cores. I will now point you to some air core alternatives, with test data, made by G3TXQ.